Fajar Nindyo    November 18, 2017    Manado    Comment
Coelacanth is the only existing primitive fish species and belongs to the order of Coelacanthiformes. Based on fossil record, coelacanth first appeared on earth in 360 million years ago during the great age of fish in the Paleozoicum era, 100 million years before the birth of dinosaurs in the Jurrasic Perion.


Coelacanth was previously thought to be extinct since 65 million years ago until a living specimen was netted off in the East London water, in 1938. The fish was recognized as a living fossil and named Latimeria chalumnae. The finding was dubbed as the greatest zoological discovery of the 20th century.

In 1997, a coelacanth was incidentally encountered by a tourist couple in a traditional market in , North Sulawesi, Indonesia. This species is different from its South African relative with an estimated divergence time between the two of 30-40 million years ago, named Latimeria menadoensis and called "King of the Sea" (Ikan Raja Laut) by the locals. In 1998 and 2007, two coelacanths were unintentionally caught alive by local fishermen in . Today, they have become very important speciments for science. Research in the last three years using ROV (Remotely Operated Vehicle) has recorded seven individuals of coelacanth in the . 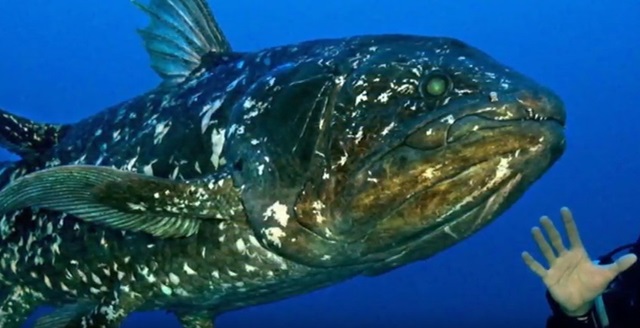