Established in 1980, the park takes its name from Maount Leuser whose peak stretches to 3,404 m above see level. Together with Bukit Barisan Selatan and , it forms the Tropical Rainforest Heritage of Sumatra UNESCO World Heritage Site (inscribed in 2004). Leuser was also declared by UNESCO as a biosphere reserve in 1980, and by ASEAN Secretarial as in 1984.

The GLNP is located within the 2.6 million ha Leuser Ecosystem (LE) and is the last place where potentially viable populations of Sumatran elephants, orangutans, tigers, and rhinos exist and the only place in natural world where they are found together. The LE represents a complex, amazingly diverse, but above all, fargile habitat. There exists a wide ranging, delicately balanced network of animal and plant species, of which just a selection of them are introduced in this article.

In the 1980s and 1990s, local people were actively cutting down trees illegaly from the park for commercial timber. However, after a time the people became aware of the damages wrought by such activity and the errors of their ways, and thus collectively decided to stop illegal logging and transform the area into an ecotourism destination. Thus in April 2001, the residents gathered and passed local regulations prohibiting illegal exploitation of the forest and established the Tangkahan Tourism Institute (Lembaga Pariwisata Tangkahan).

Lembaga Pariwisata Tangkahan established an MoU with GLNP Management in April 2002 to manage the Tangkahan forest for ecotourism purposes. LPT developed the Community Tour Operator (CTO) system which provides accomodation and local tour guides for visitors. In addition to amazing GLNP forest trekking in the area, Tangkahan is also the base of the Conservation Response Unit (CRU), consisting of a team of ex-captive Sumatran elephants and their mahouts (elephant tenders) that regularly patrols the national park to protect from any possible encroachment. Visitors can also do elephant jungle trekking for one or two hours by joining the mahouts atop an elephant's back for a stroll through the forest, or enjoy four days three nights elephant jungle trekking from Tangkahan to Bukit Lawang. 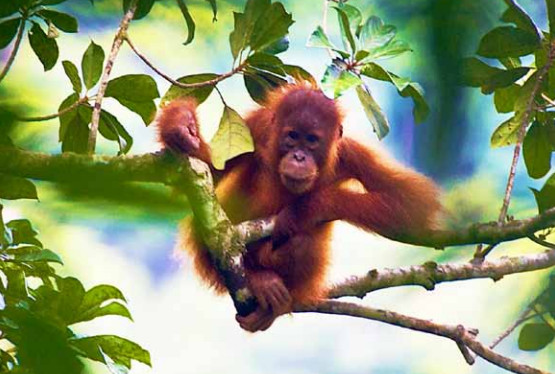