The Geopark has an area of 1,261 km2 covering 74 (seventy-four) villages in 8 (eight) districts: Ciracap, Ciemas, Surade, Waluran, Simpenan, Cikakak, Cisolok, and Palabuhanratu. This area can be reached by driving a car from to Palabuhanratu, the capital city of , as the gateway to the northern part of the geopark region.

One of the geological heritage is the oldest rock complex in as the evidence of a subduction process between the Eurasian continental plate and the plate that occurred during the Cretaceous period (> 65 million years ago). This rock complex is located in , Ciemas District.

There is also a horseshoe-shaped amphitheater that opened to the with an area of 15 x 9 km, a valley with a depth of 300 m, and more than 7 waterfalls along the valley wall. The landscape is included in the area of , Mekarjaya, Mekarsakti, Ciemas, Cibenda, and Girimukti, all in Ciemas District.

Another is geysers and hot spring that spouts continuously in the Cisolok River flow with temperatures ranging from 40-98 C with varying height up to 5 (five) meters, as well as travertine deposits (CaCO3 calcite). At the same river flow in Cisukarame area, there are also some , sinter deposits, fumaroles, and hot mud. This phenomenon shows the existence of magma activity in depth, as well as the geothermal potential that can be utilized for friendly environmental energy resource.

In addition to the mentioned above, 3 (three) outstanding geological heritage sites, there are also many geological objects of national and local scale in the geopark region, ranging from rock types, fossils, caves, waterfalls, beaches and islands of exotic shapes and ancient animal-shaped rocks.

The geological diversity in the southern part of geopark region is evidence of rock produced by subduction processes (collisions between continental plates and oceanic plates) that deposited in the very deep trench. Those rocks later are uplifted to the surface and known as mélange complex which can be seen in the southern part of the geopark region particularly within the Cikepuh Wildlife Reserve and Cibanteng Nature Reserve in .

In Cikepuh area can be seen the oldest rock complex in West Java which formerly came from the outermost layer of the earth’s mantle on the ocean plate, the ophiolite group (peridotite, gabro, anortosit, basal Java) and deep-sea sedimentary rocks such as chert. In this location is also found metamorphic rocks produced due to the collision process between the plates namely schist, phyllite, amphibolite and serpentinite and quartzite.

In the coastal area of Cikepuh region, there are unique geological objects in the form of ancient animals shaped-rocks such as frog stone, rhinoceros stone, dragon stone, crocodile stone, komodo stone, turtle stone, and buffalo stone. In addition, there are other unique shaped-rock such as a toppled fence, batik patterned, alien head, and sea cave. All of the shaped-rocks are produced by the geological processes of erosion, aberration and weathering that occurs in the outcrops of Eocene sedimentary rock of Ciletuh formation.

In the Gunung Badak area can also be seen the existence of mixed rock (mélange) that resembles polimic breccia which is a mixture of oceanic and continental plates constituent that deposited in the very deep trench formed during the collision between the plates. In the mélange complex can be found all types of rocks ranging from ophiolite, metamorphic rocks, igneous rocks of continental plates and sedimentary rocks that are deposited later on the trench such as conglomerates sandstone and tuffaceous sandstone and sedimentary breccia. In this location also can be observed sea cave and the exotic form of .

Some of the most beautiful beach areas are located in the southern region such as , , , , , , , , , and . is a favourite place surf for professional surfers.

In the middle part of the geopark region, the outstanding geological heritage is the mega-amphitheatre landscape located in Ciemas district. It also has a highland landscape which is called Jampang Plateau. From this highland, there are some interesting viewpoints to see the beauty and splendour of the amphitheatre and several waterfalls on some of its walls and the green stretches of rice fields in the valley as well as the green of conservation forest in the Cipeucang area.

The outstanding geological sites in the northern part of geopark is the occurrences of geysers or spouting in the which is a rare geological phenomenon even in . In the same location also can be found some that are widely used by people as a recreational place for swimming and soaking in hot water pool. 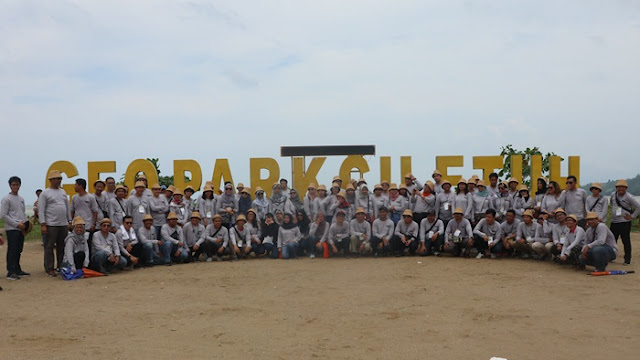 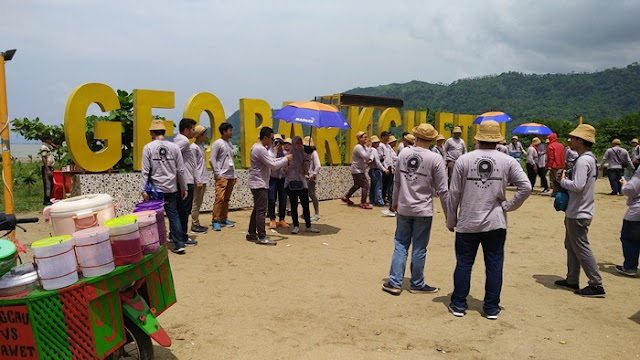 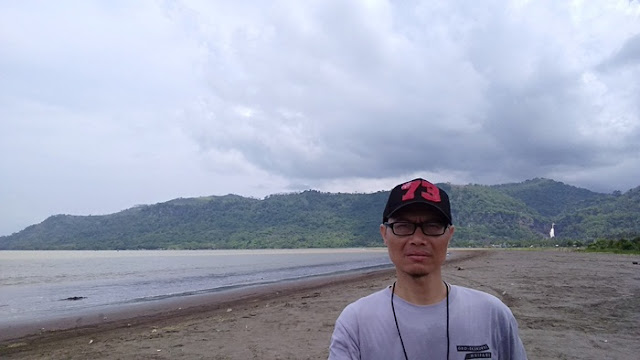 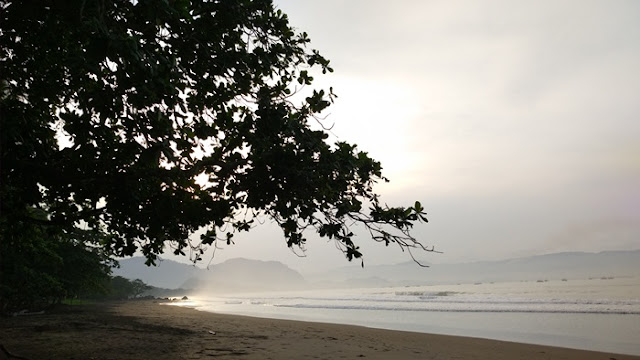 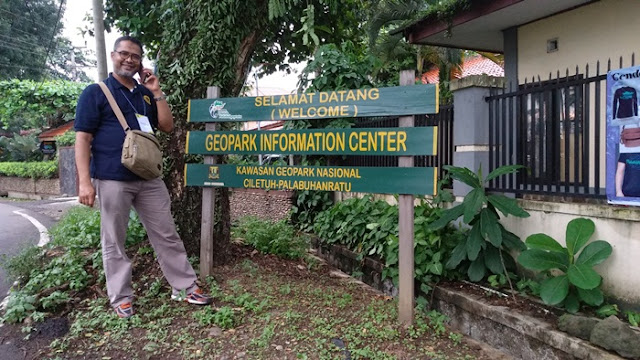 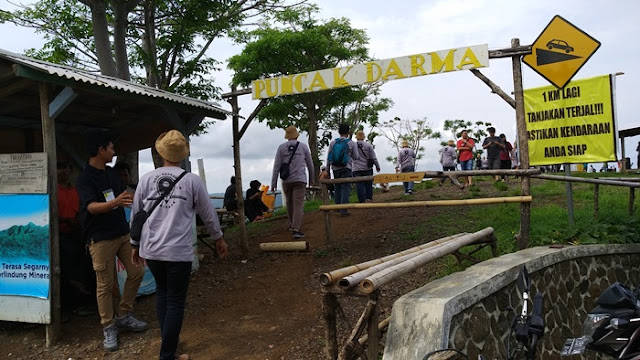 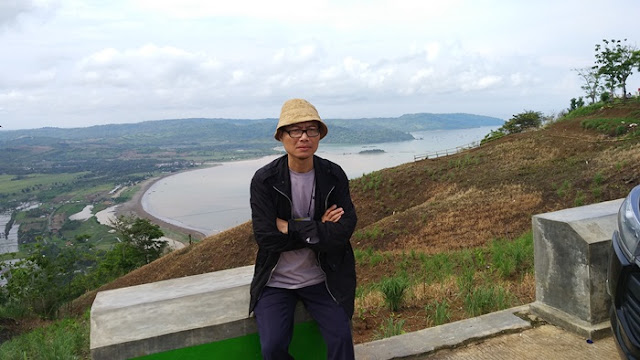 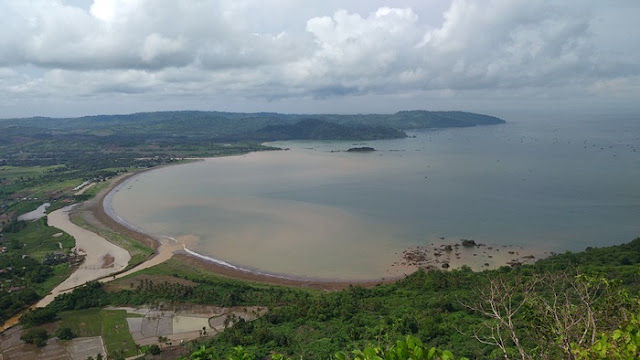 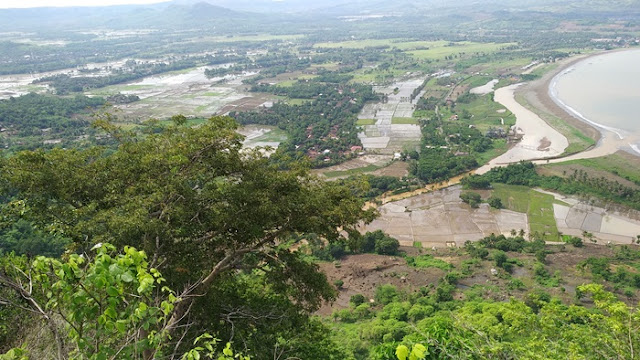 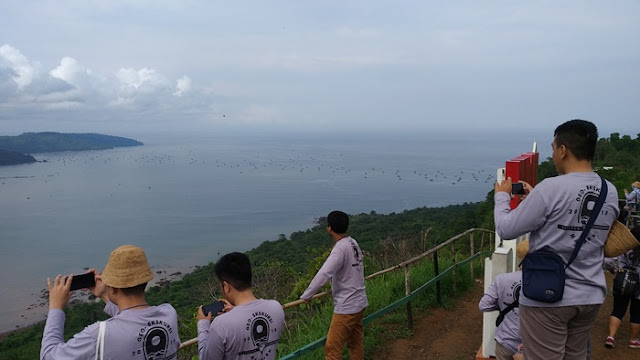 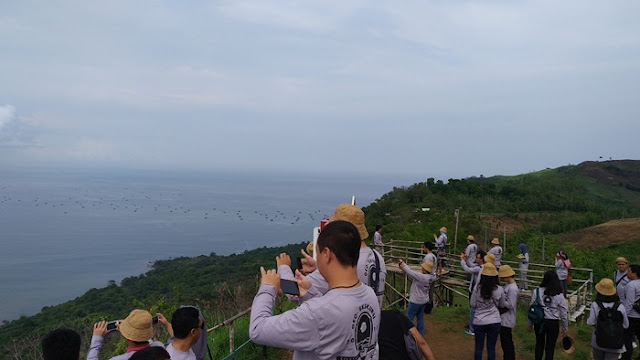 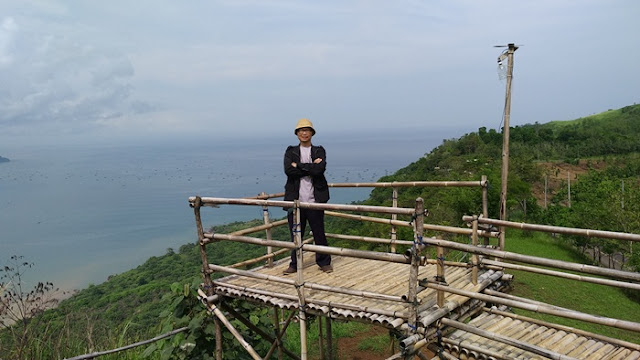 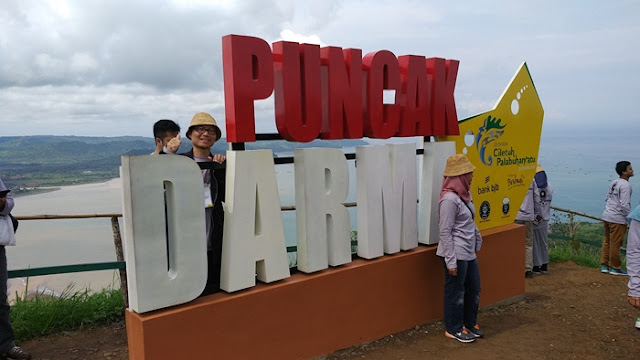 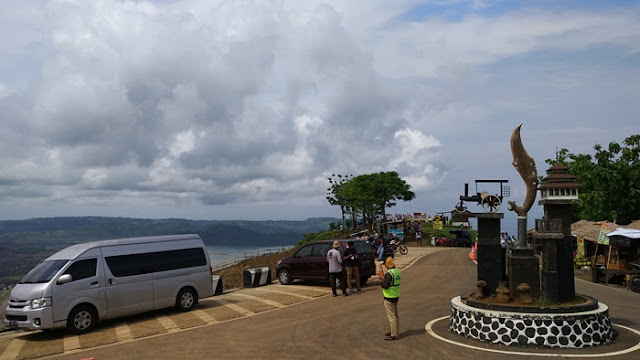 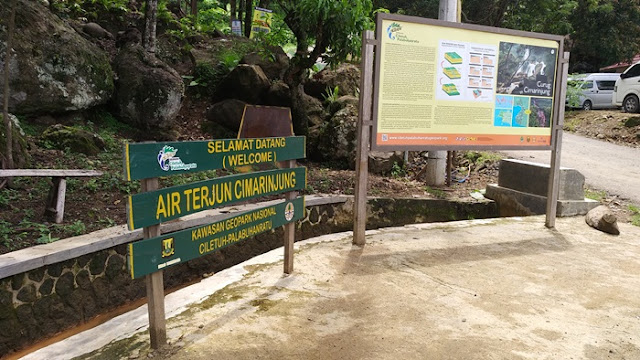 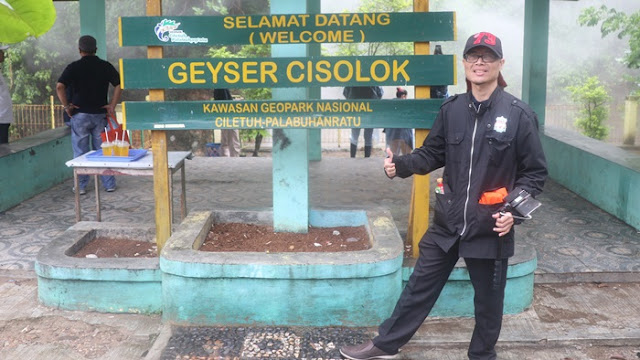 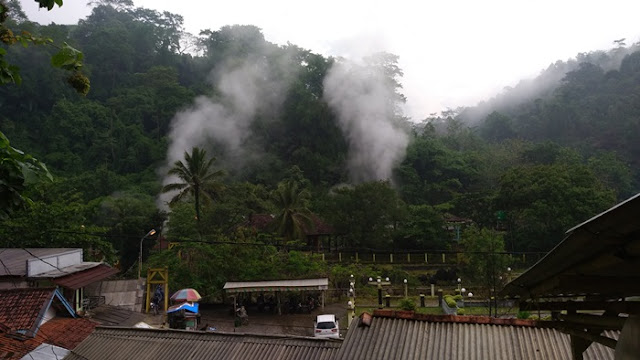 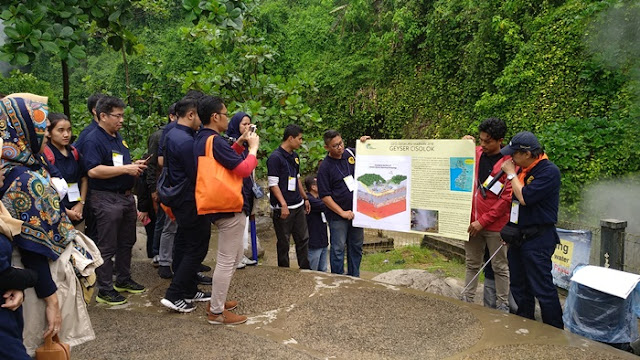 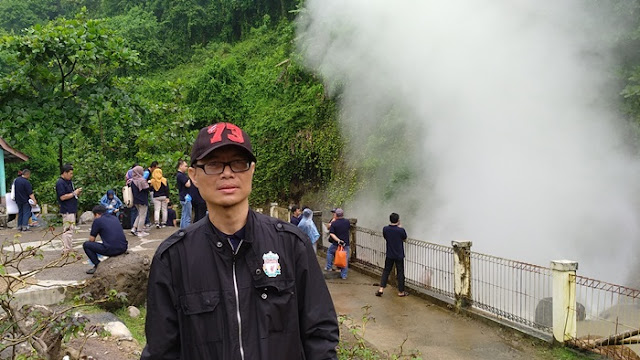 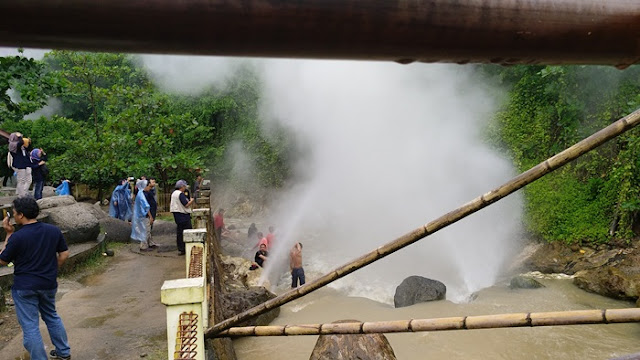 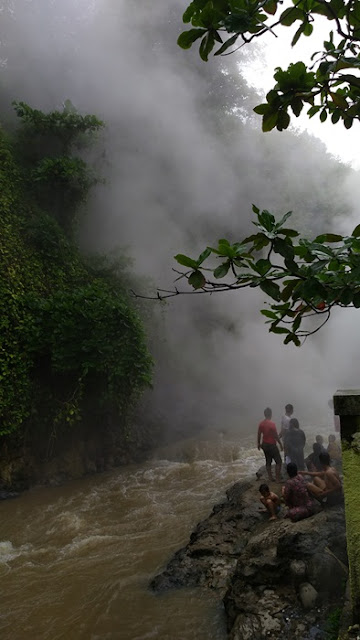 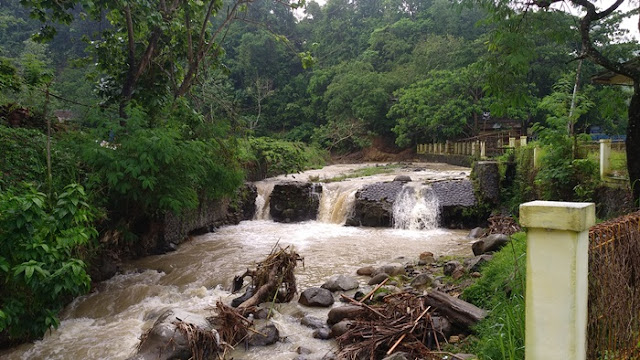