Since the Nusantara zone is an archipelago, the initial inhabitants of the zone were separated into small groups inhabiting different islands and eventually creating a variety of tribes or ethnic groups with their cultural varieties.

In its later development, a heterogeneous Indonesian people was created by the interactions of its inhabitants between immigrants, local people and the various ethnic groups. The merging and preservation processes later added variety to the multicolored appearance of Indonesian people.

The evidence indicates that humans and animals in the Nusantara archipelago came from the Asian mainland. Faunal migration from mainland Asia to the Nusantara archipelago began around 2 (two) million years ago (at the end of the Pliocene era), while human migration occurred later on from 1.7 million to 700 thousand years ago, a group of new fauna arrived in Java from South China among which were the gibbons, orang utans and other primates. Faunal fossils of these groups have been discovered in Cijulang West Java.

Also during the Early Pleistocene era, around 1.5 million years ago, groups of humans started to arrive in the Nusantara archipelago. Prehistoric sites along the banks of the Bengawan Solo river preserved many prehistoric human fossils of these humans. Later around 40,000 – 11,000 years ago, when the structure of the sea and land was more stable, modern humans –called Homo sapiens- like us emerged in Nusantara. Evidence of their existence is indicated by the discovery of fossils in Wajak Central Java.

Human migration continued. Next was the migration of the Mongoloid races from to the archipelago pushing the Australomelanesid race to the eastern part of . In later historical periods evidence points to the Nusantara area being visited continuously by people from a wide variety of nations around the world. 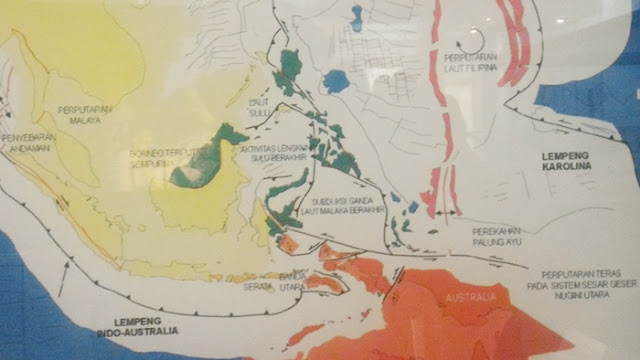