Jakarta as a Part of Tarumanagara Kingdom

Fajar Nindyo    November 03, 2018    Jakarta    Comment
The name “Taruma” means the indigo blue colour that still has the same meaning in Sundanese. Sundanese tradition knows this name as the natural colour that originates from tarum leaves, used since older times to dye clothes.


From the description written in Jakarta History Museum, Tarumanagara is one of the oldest kingdoms in Nusantara (5th century) other than Kutai (4th century) that left Yupa inscriptions in East Kalimantan.

Chinese historical sources from the same period mentioned about ambassador from Tolomo, a kingdom in the south which described as a place on the west part of Java Island. The location of Tarumanagara’s area stretched between west end (marked by Cidanghyang inscription, Lebak, Banten), then covered the Jabodetabek area of today (marked by Tugu inscription, of Tugu, North Jakarta), and inscriptions found in Bogor (Ciaruteun, Bukit Koleangkak, Pasir Awi, Muara Cianteun and Kebon Kopi) and also an area of historical findings of Batujaya temple complex, on the east side of Ciliwung river. Looking into the shapes of the inscriptions and their vicinity with prehistoric findings, it is shown that the findings on the west and south side marked the bordering area with people who are still living in the prehistoric civilization. This is a striking difference with Tugu inscription that was done quite special throughout the shaping of the stone into the perfect egg-shaped roundness, the circular carving of the texts and also the depiction of regalia staff.

Remains from Tarumanagara period show early times of the arrival Hinduism and Buddhism influence from India. Hindu remains found in Jakarta in the shape of Hindu statues while two Hindu temple remains found in Cibuaya, Karawang, that shows belief toward Visnu. Then in Jakarta, Siva, Ganesha, and Uma (other shapes of Purvati goddess) also found. Other than two Hindu temples in Cibuaya, there is also one vast complex in Batujaya, on the river bank of Ciliwung that shows Buddhism remains in shape of a stupa and other worship architectural remains made out of bricks.

Vishnu Cibuaya 1, although originated from the 8th AD, is considered able to compliment Purnavarman inscriptions. Wisnu’s finding site in temple remains in Cibuaya that is not far from Batujaya site and also Wisnu worship cult that is Purnavarman’s faith became the thread that connects them. This statue iconography style shows similarities with statues found along the Malay Peninsula, Siam and Cambodia and showing an influence of Pala art style of South India from 7th – 8th AD, or possibly with style from Calukya period.

Vishnu Cibuaya 2, also found in Cibuaya village, yet its original location cannot be confirmed. Based on similarities on the statue with Pala style statues from 7th – 8th AD, it seems that this statue came from the same era. Pala is one of the dynasties that ruled in Bengal from 8th – 12th AD. This conclusion is confirming Chinese historical records that say in the 7th AD there was still a state named To-lo-mo that is considered as Chinese pronunciation of Taruma. 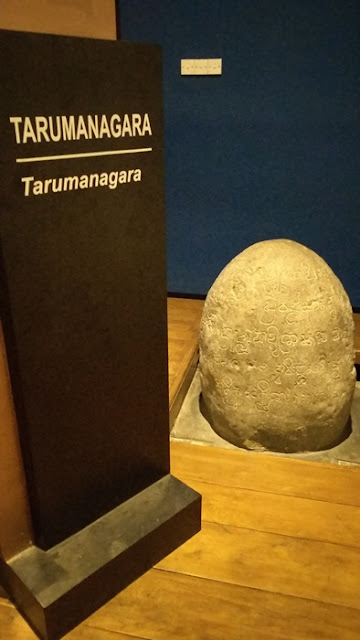